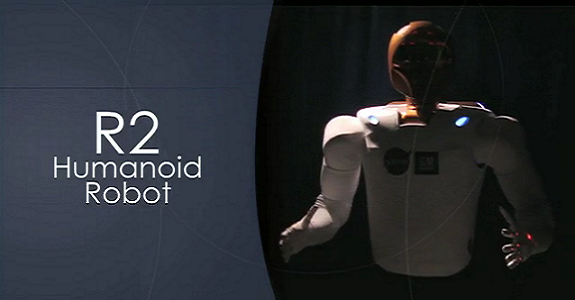 About a decade ago, two of our favorite government entities, NASA and DARPA, paired off to create the robotic astronaut of the future: Robonaut. He had a cool copper helmet and some faux-muscly arms, but ultimately never made it to space. Now, 10 years on, NASA's back with Robonaut2, created along with General Motors, who hopes to enslave poor R2 in its assembly plants. The details of exactly what has changed in this iteration are slim, but R2 is said to be more dexterous than its predecessor and stronger too, able to lift a 20lb dumbbell without getting all red in the face. It also seems to have lasers in its knuckles for some reason we can't quite figure out, but we're digging the look nevertheless. R2 is said to be helping NASA into a "bold new era of space exploration," and while we don't know exactly when that bold new era begins (now?), we do have a particularly menacing video of the original Robonaut included below

Robonaut is a humanoid robot designed by the Robot Systems Technology Branch at NASA's Johnson Space Center. The Robonaut project seeks to develop and demonstrate a robotic system that can function as an EVA astronaut equivalent. Robonaut jumps generations ahead by eliminating the robotic scars (e.g., special robotic grapples and targets) and specialized robotic tools of traditional on-orbit robotics. However, it still keeps the human operator in the control loop through its telepresence control system. Robonaut is designed to be used for "EVA" tasks, i.e., those which were not specifically designed for robots. TRACLabs Inc. researchers were involved in the design of Robonauts manipulators, hands, vision system and automation control software. Visit www.TRAClabs.com for more.